Come visit us in a happy corner! We sew for world peace! Get you’re own Hello Stranger name tag for free and feel Welcome.
Artist Q. Bies is your personal sewer !

Three friends had too many plans, too many ideas and too many voices in their heads. Looking for a new outlet to channel this creativity, Kittiwake was formed: music with no rules or restrictions, with the sole goal to get people dancing.
https://www.youtube.com/watch?v=Hs8N-fBnhWk

Brunch is only with reservation. For yoga you can just walk in!
http://tankstationenschede.nl/reserveren/ 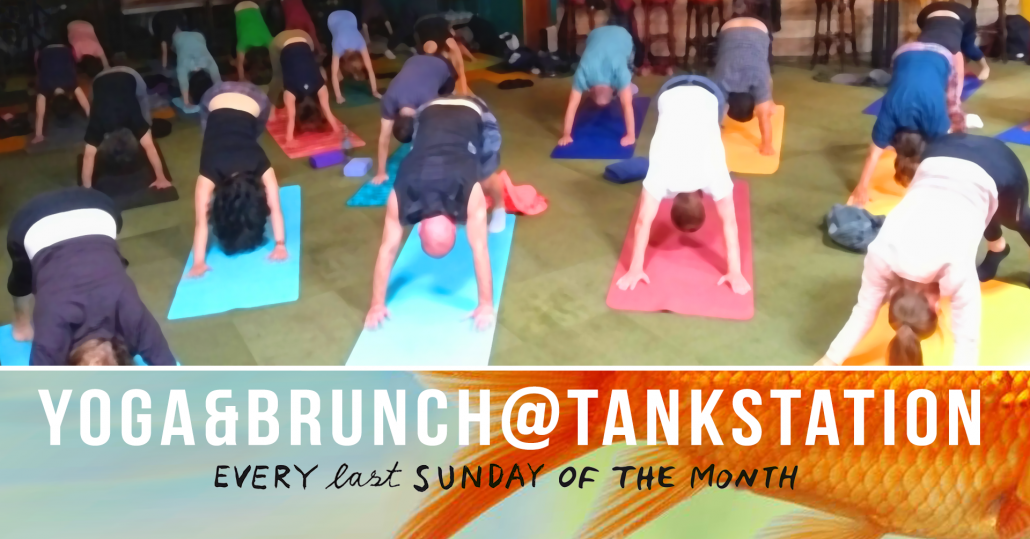 Rotterdam-based quartet Neighbours Burning Neighbours is unfazed by chaos. In fact, the band’s music could be considered something of a safe space for the more chaotic skirmishes and impulses; a formidable, malformed brand of noise-pop that pierces through the void, achieving joyous harmony within even the starkest of discord. https://www.youtube.com/watch?v=RCw3hYcytwQ

Hanako’s screamy, noise-rock, massive sound combined with devotional lyrics is a unique, desperate yet filled with hope call for a better tomorrow. They come from a place, where every flower’s meant to rot, but they keep on trying to find their way in this bleak reality. https://www.facebook.com/hanakoscreams/

Feel free to join us on the stage! Or just come to socialize and listen to fresh tunes you’ve never heard before! Everybody is welcome! We have a full back line and some instruments but if you’d like to bring your own, please do! Let’s get together and have loads of fun!

We are looking forward to your play with you! 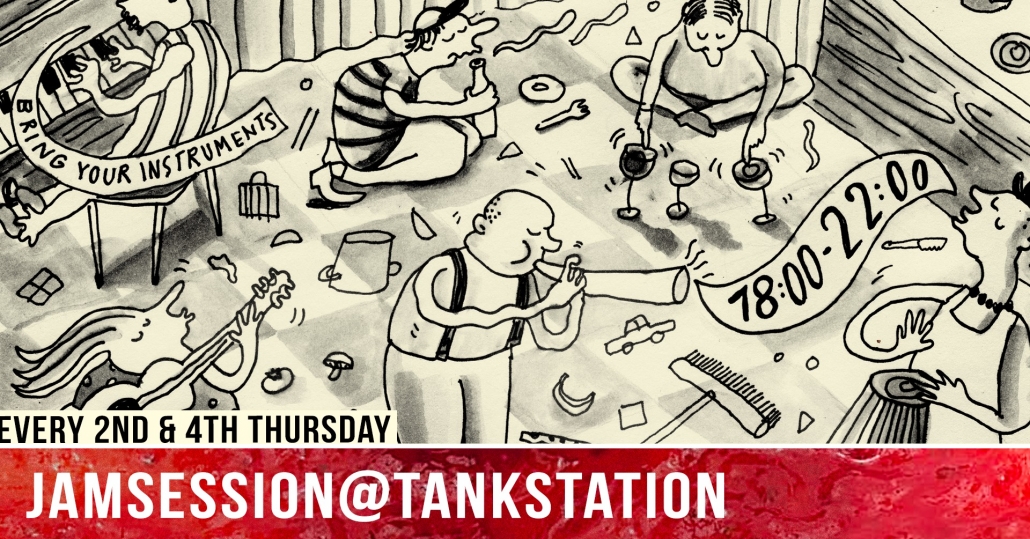 We celebrate cooking experimental, nutritional, delicious vegan meal in our community kitchen. Join us at the table for a family meal!

In case of special diet please inform us latest on Monday evening! Reservation is not mandatory but preferred ! It makes it easier for us to buy the right amount so less is wasted! ( to be made until Monday evening, valid till 18:30 on Tuesday)
http://tankstationenschede.nl/reserveren/ 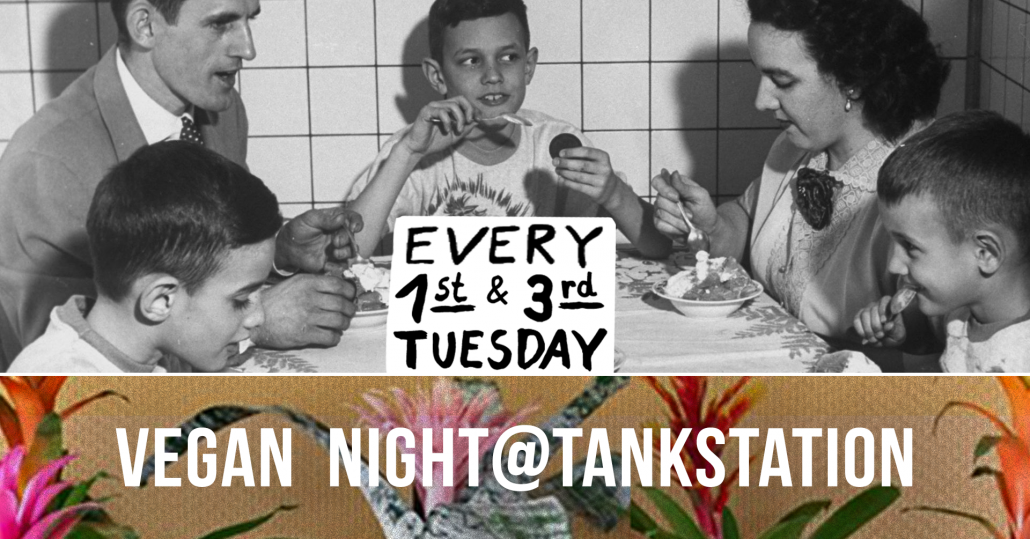 Enschede got itself a guaranteed night of laughs as four international stand up comedians will bring their comedy tour to Tankstation. Tracing their influences and experiences from the ancient SILK ROUTE in the Himalayas, they will trade their tales from places far and beyond to spread joy, enlightenment and laughter. The wisdom and follies of these wanderers is a treat for those who like to laugh hard. Regular merchants of laughter Hermes and Fedor are accompanied by two talented guest comedians Alina Sharipova and Rami Nima.

Featuring:
-Hermes Ahmadi is an Afghan refugee, who lives and works in the Netherlands. Hermes honed his skills with the microphone while studying sociology. A very sought-after act in the Netherlands, Hermes’s energetic and powerful delivery has made him a favorite on the festival-circuit. His success has further motivated him to take up comedy as a profession.
-Fedor Ikelaar always felt a bit out of place in his native country Netherlands. So, a few years ago he left home to live in Nepal, where he feels even more out of place. Nowadays, he is one of the biggest English language comedians in Nepal, as he is quite tall. A full-time touring comedian, Fedor regales audiences all over the world with stories of being surrounded by spiritual Nepalese, opium dealers and forgotten hippies. He mostly fits himself one of the aforementioned categories except at international airports ~ where he goes back to holding on to his Dutch passport.
-Alina Sharipova is a Russian- Belgian comedian. She is often compared to herpes, because she never really goes away. She says her dream job would be designing fortune cookies, but in the meantime stand up comedy will just have to do!Alina was born in Uzbekistan and moved to Belgium at the age of 6. In July 2019 she decided to throw herself into stand- up comedy. Since then she cut ties with her friends and family, cause who needs them when you have comedy.
-Rami Nima is mixing the dark with the weird and lacing it all with clever punchlines in a hilariously dry tone. Rami won’t convince you of anything. His method is subtle and will disorientate you in an unusual way.

Enschede based visual creators Thomas Chudoba (1971) and Zus Stapel (1973) have been building an oeuvre of works together for the past six years. They worked each, individually, with (mostly) one medium, Zus with fabric and Thomas with light….but once they met, the chemistry started working and they felt working together would bring forth an image stronger and the duality that is created by working with two key materials invites a dialogue. This dialogue plays a constant factor between creation and creator and is of greatest value to the artists.

The fact that we are humans with a drive to express ourselves is an obvious drive for the artists as visual creators, but sharing the dialogue between creator and creation as two individuals gives the works a depth that surpasses art, experienced by the artists as a powerful flow of energy between two sources and a broad exchange of mental and emotional content.
Tapping into paired subjects such as male and female, yin and yang, physical and spiritual, reality of things and surreality of them, universal duality of everything. In the end they can bring it all back to two things… fabric and light, or better said, matter and energy.

Thomas Chudoba and Zus Stapel work from their studio at STUDIO COMPLEX and prefer a conscious, minimalist and low tech approach towards materials and expense. tekenen.

EN
Johan Ghijsels has always wanted to be a painter. After 30 years of being a professional photographer, his relationship ended with his camera and he started to paint, partly to cope with the divorce and also to put a new order into his life! In the beginning he had difficulty with painting technics. Also looking back, it was emotionally difficult time. After years of struggling with dark emotions, a new shape and new approach to colours appears. Now his believe in the future is visible.